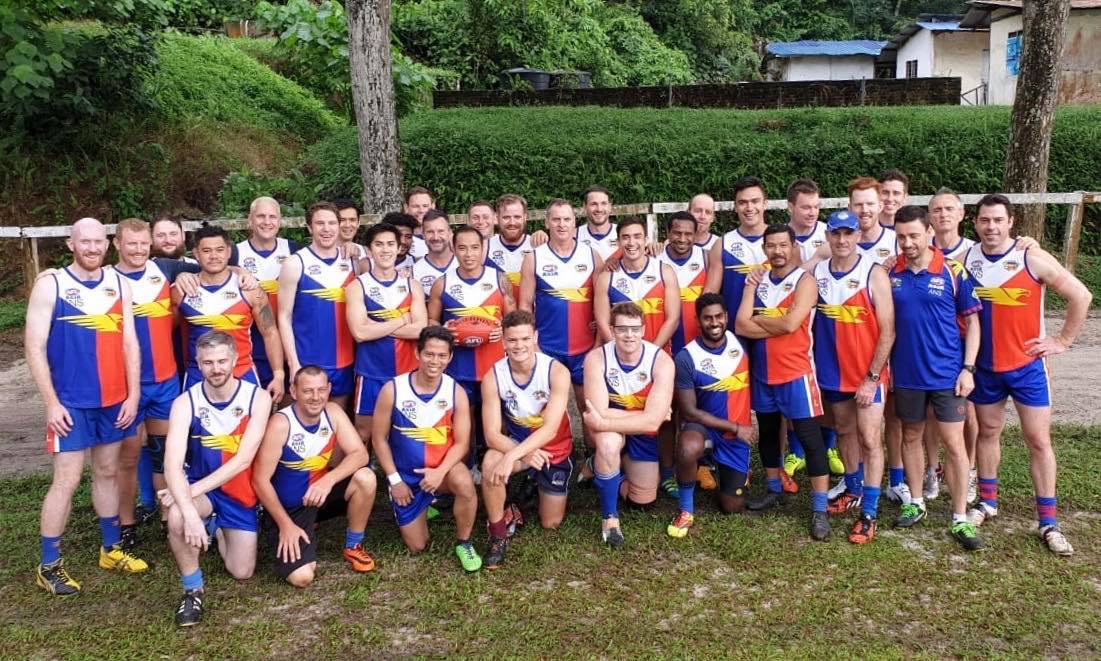 The Philippine Eagles ventured to Kuala Lumpur, Malaysia for the 2018 AFL Asia – Asian Championships. An exciting time for the club as we were sent a squad of 40 Eagles over to challenge for the Championships as well as having a new coach in Anthony Sacco and one of the longest-serving Eagles leading the charge with Winner Santos as Captains. The hard work had been done, the right people were in place, it was time to get the job done.

The Eagles first game was one of the last in the first rounds of the round robin against Singapore Wombats. The Eagles start off strong getting some early goals on the board in the first half and dominating with pressure and movement of the ball, maintaining the few goals lead into the halftime break. With this confidence, the Eagles continue this style in the early second half until the Wombats fought back secure several unanswered goals. Coming down to the dying minutes, the Wombats were able to gain the lead with making the next break out of the center a must win for the Eagles.

After losing the first game of the championships, every game afterward was a crucial win for the Eagles. The next game saw the Eagles take on the reigning Champions, the Malaysian Warriors. The Eagles determine to win came, out strong in this game and never looked back leading the first half and maintaining the lead to the final siren winning our second games by 29pts.

The third games were against the newly formed Indonesia Volcaneos, the combrination of the jakata Bintangs and BaliGeckos who had represented themesleves in previous champsionships. Targets as one of toughest games, the Eagles maintain the pressure and pace football that we showed in our previous game against the warriors. Getting the lead early provided the confidence the team needed to match the Volcanoes with a narrow margin leading into the halftime break. The same style and games were seen in the second half of the game which looked as if this would go down to the wire, but the Eagles were able to get a couple of major scores to win against a dominant team.

Our Final round-robin game is yet another must win to for the Eagles to go through to the Grand Finals. This game was against an old foe, Hong Kong Dragons. Ove rthe years, the dragons have always delivered on a hard fought game, which this game was not the expectation. The games were level throughout the whole game with several lead changes throughout, but the Eagles were able to hold out to win the tightly fought game by 1

We were now into the Grand Final, our third consecutive appearance in the main game since winning the championship in 2016.  This year we would meet the strong Indonesia Volcanoes who had to enjoy similar success to us throughout the day. As we expected, the game got off to a very even start with a tough physical contest for the ball and great pressure from both teams. At the half-time break, the scores were even. The second half continues the same way the first half finished with both teams stepping up to the challenge. As the second half time ticked down, the Volcanoes began to break way, scoring a couple of unanswered goals. The Eagles were able to peg back one major score, however, run out of time to score again to take the win. The Indonesia Volcanoes win the 2018 Championship by 1 goal.

While we were not able to bring home the cup, it was truly a successful campaign for the Philippines Eagles maintaining our competitive strength at the top level of AFL Asia. We would like to thank Malaysian Warriors for hosting the event, as well as the rest of the division one team’s championships to remembers.

Our Road to Finals

Below is the list of the games for Divison 1 which the Philippines won 3 of eh 4 games to make it to the Grand Final.